Please check back for updates! 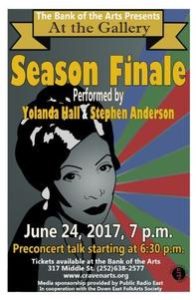 Join us for a special encore presentation of the At the Gallery series. The 20th Century American Composer Season Finale will draw from the songbooks of all eight of this season’s preceding performances, performed by international jazz vocalist Yolanda Hall, accompanied by jazz piano virtuoso Steven Anderson. This night promises to be a wonderful experience, allowing the audience to compare and contrast performances of the same composers’ hits by a different pair of musicians. 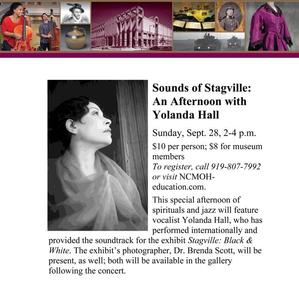 Join us for a special afternoon of spirituals and jazz music by vocalist Yolanda Hall. Hall, who has performed internationally, provided the soundtrack for the exhibit Stagville: Black & White.

As part of the program, photographer Brenda Scott will talk about the exhibit and be available in the gallery following the concert.

Join us for a special afternoon of spirituals and jazz music by vocalist Yolanda Hall. Hall, who has performed internationally, provided the soundtrack for the exhibit Stagville: Black & White.

Juneteenth, also known as Juneteenth Independence Day, Freedom Day, or Emancipation Day, is a holiday in the United States that commemorates the announcement of the abolition of slavery in Texas in 1865, and more generally the emancipation of African-American citizens throughout the United States. During the US Civil War, President Abraham Lincoln issued the Emancipation Proclamation on September 22, 1862, with an effective date of January 1, 1863. Although it declared that slaves were to be freed in the Confederate States of America in rebellion against the federal government, it had minimal actual effect. Even after the ending of military hostilities, as a part of the former Confederacy, Texas did not act to comply with the Emancipation Proclamation. On June 18, 1865, Union General Gordon Granger and 2,000 federal troops arrived on the island of Galveston, Texas, to take possession of the state and enforce the emancipation of its slaves. On June 19, standing on the balcony of Galveston’s Ashton Villa, Granger read the contents of “General Order No. 3”:

The people of Texas are informed that, in accordance with a proclamation from the Executive of the United States, all slaves are free. This involves an absolute equality of personal rights and rights of property between former masters and slaves, and the connection heretofore existing between them becomes that between employer and hired labor.

Now Juneteenth is celebrated on or about the 19th of June.

Come celebrate with Yolanda Hall at Historic Stagville on June 14th and see North Carolina’s copy of the 13th Amendment that ended legal slavery in the United States.