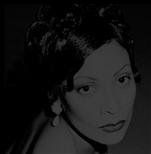 Yolanda Hall embodies a voice that is alluring, charismatic, and timeless. Her jazz vocal expression captures her audiences and takes them on a memorable musical journey, combining jazz and classical elements, creating an atmosphere of a bygone era. Most of our legendary singers of the golden age of jazz are no longer with us, yet Yolanda seems to embody the best of her predecessors, while making the songs she sings her own. She delights her audiences with a smooth sultry voice that effortlessly flows from soprano to baritone and back again, pulling out every nuance of the music with her remarkable range and interpretation of the lyrics. Her command of the stage and versatility allows her range to shine through, creating a sensual and glamorous ambiance.

Yolanda later returned to Durham where she sought out noted jazz pianist and arranger, Yusef Salim. She’d seen him perform years earlier with Carol Sloane, and it was this union that spearheaded Yolanda into the jazz world. “It was my destiny to begin singing this style of music. Jazz chose me. It was in my blood waiting to flow out, ” stated Yolanda.

This segue from classical music to jazz creates a rich balance. She’s at home whether she’s singing with a jazz combo or a full orchestra. She has performed throughout the United Sates, Europe, the French Caribbean and the South Pacific, captivating her audiences not only with her vocal gifts, but with her passion and enthusiasm for jazz music.

Dedicated to facilitating the awareness and preservation of jazz, Yolanda has enjoyed sharing what she has learned and sought out opportunities to further the awareness through the use of workshops and lectures. She has served as a clinician at Duke University and Somerville College, Oxford University. She was a participant in the Spoleto, Italy Jazz Workshop, received mention in the New York IBLA Foundation Vocal Competition, and was a semi finalist in The Savannah Music Festival American Traditions Competition.

Yolanda has recently begun preparing works for an upcoming CD. Over the past few years, performance after performance, Yolanda has been asked if she had any recordings. She is excited to finally be compiling past and present works of her compositions, as well as works from long-time collaborator Yusef Salim. The CD will showcase her wonderful talent. Even though Yolanda is not yet a name you might be familiar with, once you’ve heard her, you will be glad you’ve found her.